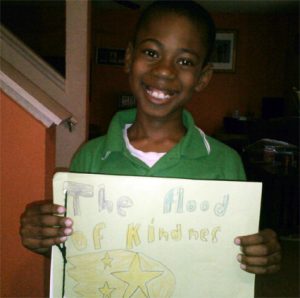 I want kids to learn how the power of kindness can change your life and the life of others. I want to bring to light the story of Hurricane Katrina and how devastating it was to the people who lived in New Orleans at the time. I feel like this story can reach out to people around the world. If it reaches New Orleans, I would be very proud and honored.

The world today needs more kindness right now. The world is in the state of anger and hate, like it was in my book that was written several years ago. I hope that all Americans can start the healing process. 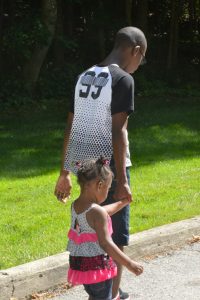 I still remember the day when I talked to DeAnte about Hurricane Katrina. He was very young and I worried if I was showing him too much. He was very sad about the situation. I told him that I went to college in Louisiana and I worried about all of my friends and fellow classmates that were from New Orleans. We had a great discussion about it and said a prayer for everyone that was impacted by the flood.

When DeAnte came home in third grade with the Historical Fiction assignment he already knew what he wanted to write about. He didn't ask for any assistance with his project. I was very excited that he decided to write about Hurricane Katrina. When I read the book for the first time, I broke down and cried. I wasn’t expecting it to be so touching.  After he brought the book home, we left it in a special place for a while. We only shared it with family and friends. One day I decided that I wanted to do something with it. I contacted Laurie and asked her to help me bring it to life. I’ve enjoyed watching her mentor DeAnte during this process. I must admit that some days where easier than others. DeAnte has always been excited about the book, but working on something for five years can be very frustrating. I look forward to seeing others enjoy the book as much as I have. 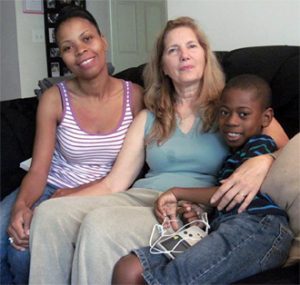 Laurie Marshall has been a good friend of mine for over fifty years. It all started when the American Friends Service Committee arrived in Richmond, Indiana in 1963 to help paint and do minor construction work at the newly built Townsend Community Center. The mission statement of the American Friends Service Committee is one that promotes lasting peace with justice. Laurie's sister, Lisa, and a group of college students had arrived earlier that day and worked at the Center. Laurie came down to visit her sister. Prior housing arrangements had been made for them and sadly Laurie couldn't stay with the group. We didn't want her to leave so I asked my mother if she could stay with us for a week. No white person had ever set foot in our house. My mother said yes and immediately fell in love with Laurie and considered her to be one of the family.

My family and the Richmond Community also fell in love with Laurie because even at a young age her kindness, respect, and caring attitude made everyone very happy. The overall mission of the American Friends Service committee was expressed to everyone through the works of the group.

The American Friends group was traveling to Russia the following summer and Laurie wanted me to go. I didn't think that I would be able to attend. Dreams do come true! With a scholarship, a job at Target, and donations from the Richmond community I was able to travel overseas. I gained so much confidence from this experience.

I traveled to Pittsburgh several times where I met Mr. &Mrs. Marshall. They immediately made me feel like I was part of their family. Laurie and I went on several more work camps together. I can't describe how fulfilling the trips were. My daughter was able to meet Laurie and, her other sister, Dianne, a few years later. We had a great time! Even though I wasn't very excited about Ieshia getting on the elephant with Laurie, I knew that she was in good hands. When my brother became very ill and was admitted to the hospital, Laurie's sister Dianne was at the hospital with me. He ended up passing away and Dianne was by my side. She helped me through this terrible situation.

Laurie came to my daughter's wedding a few years ago. Laurie and my grandson DeAnte immediately hit it off. They went on nature walks and talked about their interests. They both have interests in painting and writing which was exciting to see. Our friendship and love for each other has been going on for four generations. I'm very excited for DeAnte and Laurie's book. I know that it will be a blessing to others. 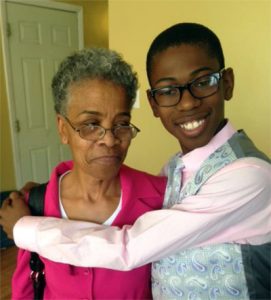 When Dee’s mom, Ieshia, sent me “The Flood of Kindness” I was moved and excited.  I looked up Jessica Park on Google because she was so real to me.  Then I found out that Dee had made her up, bringing the suffering of Hurricane Katrina to life in a vibrant young character from his imagination. Because the earth’s atmosphere is warming and there will be more large weather events, I feel an urgency in bringing his story to the world. His story honors the hardship of loss and impact on children that big storms have. He also describes the kindness we need to we handle large scale disasters.

This project has demanded a lot from this young author. He has written and re-written the story, We have thought about every word  and played with the order. I painted illustrations. I consulted Tutt Stapp-McKiernan, Co-Chair of the English Department of Wakefield School in The Plains, Virginia. She is the most widely read and brilliant story maker I know. Her feedback since 2012 has been invaluable.

I made a printed version in 2013 and took it to a Children’s Book Conference at Book Passage in Corte Madre, CA. There I learned about the standard of making a children’s book 32 pages. That meant expanding the story and illustrations.  I added paintings, which were more realistic. Dee added language, which was more sophisticated. The story didn't work for the young ones or the older ones. We realized that we needed to be clear about who our audience is. DeAnte decided to make a version for 5 to 8 year olds, followed by a version for older children. We decided to share what we’d been doing on this website, because we want to spread the good word of “The Flood of Kindness.”  I also wanted to share DeAnte's grit, sticking with a project for five years. Our process of vision, revision, vision, revision, vision and revision is the backbone of any important project.

I have spent hours looking at pictures of Hurricane Katrina, thinking of the precious lives lost and the hard work that is still going on to rebuild New Orleans. As I have worked on these paintings, I have been afraid that I could not do De’Ante’s story – nor the people of New Orleans - justice.  I also think of the big storms that are coming.

How I came to know DeAnte Webster

I am Dee’s godmother. I met his grandmother, Jackie Webster, in 1963 when I was 14 at a Quaker Summer Workcamp in Richmond, Indiana. It was run by the American Friends Service Committee. I stayed at her house for the next two summers. She was the star softball player, a person of authenticity, steadfastness and courage. I learned about segregation and the impact of racism on people I loved. Jackie's high school counselor told her she shouldn’t take college prep classes because she was only going to clean houses. She went to college and became an educator.

Jackie became a part of our family and my sisters and I became a part of hers. Jackie and I camped with a group of young people on two-month Quaker trip to the Soviet Union in 1967. We travelled through American wilderness and a Navajo reservation in 1973. We camped in Canada and Maine with my family. She has been my teacher and dear friend for over 50  years. We have both devoted ourselves to the well-being of young people.

My oldest son, Jeremy met Jackie's daughter, Ieshia when they were little. We rode an elephant at the Indianapolis zoo, along with my nephew, Forrest. My sister, Dianne Marshall, captured that moment. I attended Ieshia's wedding.  I first met De’Ante when he was 6. We immediately played drawing games we made up. I was thrilled when Ieshia sent me his remarkable story. We have embarked on a creative adventure that will last a lifetime.